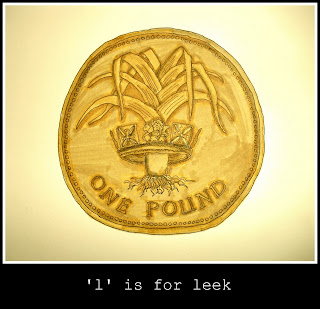 The lovely leek is a member of the Allium family. Alliums, members of the Liliacceae or lily family, have been under domestic cultivation for at least 5,000 years and as such, are one of the world's first food crops. Following their great exodus, the children of Israel remembered longingly "the fish, which we did eat in Egypt freely, the cucumbers, the melons and the leeks and the onions and the garlic."

Leeks look a bit like giant scallions, but are much milder than either onions or garlic. In the first century A.D., Nero ate leeks in oil as he was convinced they had a divine ingredient responsible for his fine singing voice and as such, was derisively nicknamed 'Porropagus' or 'leek-eater.' Aristotle was also convinced of the leek's positive effects on the voice and once wrote that the piercing cry of the partridge was attributable to their frequent consumption of leeks.

The leek has been recognized as the emblem of Wales since the mid 16th century, and was depicted in a coronet on the British one pound coin in 1985 and 1990 as a tribute to Wales. As legend has it, the leek's association with Wales can be traced back to the battle of Heathfield, which took place in a leek field. St. David reportedly persuaded his countrymen to distinguish themselves from their Saxon foes by placing a leek in their caps. The Welsh celebrate St. David's Day each year on March 1 by wearing bits of leeks in buttonholes or caps to commemorate the victory. Perhaps not coincidentally, the Welsh also have a reputation for being fine and enthusiastic singers. As evidence, I give you - this.

Americans incorporated the leek into their cuisine in 1910, when French Chef Louis Diat of the Ritz Hotel in New York reinvented a peasant soup he remembered fondly from his childhood, which was made with leeks and potatoes. He added heavy cream, topped it with chives, and served it cold. He called it 'vichyssoise' after his home town - a wonderful word that sounds like a flourish or a dance don't you think?

But alas, dear readers, there is a dark side to the history of the venerable leek. Leek growing competitions and festivals became popular in Northern England's mining communities in the late 19th century when one of the few affordable hobbies was gardening. 'Pot Leek' shows began in the pubs and clubs and were so named because of the pint pots the gardeners used for beer drinking. The competition for victory in these shows is so fierce, sabotage unfortunately abounds. Competitors have been known to sneak into rival leek fields at night and slash, trample, firebomb, or douse them with toxins. Oh no!

William Ivory became fascinated by competitive leek growing - so much so that he wrote a comedic play about it called 'King Leek' in 1996. "When I started looking into the passions that leek growing arouses in some men I was surprised," says Ivory. "Obsessive growers get so involved with the welfare of their leeks it's like a love affair. If you don't take it seriously, it's not fun. If you take it too seriously, it can break your heart." In the weeks before a big show, leek growers have been known to sleep in their leek fields to ensure no harm comes to them, often sleeping with their leeks more than their wives!

For me, leeks conjure up images of cold, misty, damp afternoons, warm soups and roaring fires. Much like you can see here and here where the talented and ever-dreamy Jamie Oliver whips up the most wonderful leek pasta and salad dishes in a rustic English country cottage. Oh my. Wouldn't you just love to be there?!


Folklore source: "75 Exciting Vegetables for Your Garden" by Jack Staub
Posted by sweetbittertart at 11:31 AM 8 comments: