'n' is for newberg 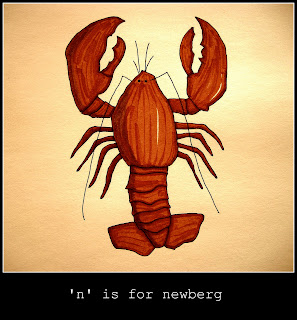 A woman should never be seen eating or drinking unless it be lobster salad or champagne, the only true feminine and becoming viands. ~ Lord Byron


Fortunately we are no longer living in the time of Lord Byron, but when left to my own devices, I will freely choose lobster and champagne as often as possible! Especially Lobster Newberg, which is a dreamy concoction of lobster, cream, butter, eggs, cognac, sherry, and a pinch of cayenne pepper. Can you think of anything more decadent or delicious? The dish was created at Delmonico's in New York City, which was America's first fine dining establishment and the birthplace of many an iconic dish including Delmonico Steak, Baked Alaska and Eggs Benedict, another one of my favorite things in all the world! Thanks Delmonico's!

The story of the origination of Lobster Newberg varies slightly from tale to tale, but involves Ben Wenberg, a wealthy sea captain engaged in the fruit trade between Cuba and New York, and a frequent customer at Delmonico's when on shore. In 1876, while home from a voyage, he visited the restaurant and told Charles Delmonico he had discovered a new way to cook lobster. He asked for a chafing dish and demonstrated his discovery by cooking the dish at the table. Delmonico was so impressed, he added it to the restaurant's menu, calling it Lobster a la Wenberg, and it became one of the restaurant's most popular dishes.

Some time later, Ben Wenberg and Charles Delmonico had an awful falling out. Wenberg was banished from Delmonico's and, alas, his signature dish was removed from the menu. The restaurant's customers were none too pleased, however, and continued to ask for the dish. Delmonico ultimately relented, but changed 'wen' around to become 'new' and Lobster Newberg was born! Curiously, sometimes the dish is spelled with a 'u' - Lobster Newburg, for reasons my sleuthing has yet to unearth.

Delmonico's famous chef, Chef Charles Ranhofer, gave the following instructions for preparing Lobster a la Newberg in his definitive tome on all things culinary, The Epicurean, published in 1894:

"Cook six lobsters each weighing about two pounds in boiling salted water for twenty-five minutes. Twelve pounds of live lobster when cooked yields from two to two and a half pounds of meat with three to four ounces of coral. When cold detach the bodies from the tails and cut the latter into slices, put them into a sautoir, each piece lying flat, and add hot clarified butter; season with salt and fry lightly on both sides without coloring; moisten to their height with good raw cream; reduce quickly to half; and then add two or three spoonfuls of Madeira wine; boil the liquid once more only, then remove and thicken with a thickening of egg yolks and raw cream. Cook without boiling, incorporating a little cayenne and butter; then arrange the pieces in a vegetable dish and pour the sauce over."

Fortunately, you can still visit a modern-day Delmonico's and enjoy all of their signature dishes. Bon appetit!!

Posted by sweetbittertart at 10:06 AM 6 comments: