'h' is for humboldt fog cheese 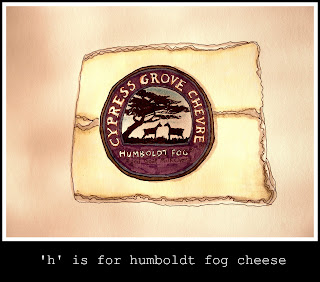 Humboldt Fog is an artisanal goat's milk cheese produced by Mary Keehn's dairy, Cypress Grove Chevre, in Arcata, California, about 200 miles north of San Francisco. Arcata is adjacent to Humboldt Bay in Humboldt County, and the cheese was named in honor of the ever-present fog for which the area is known.

In the 1970s, Mary began searching for a source of wholesome, healthy milk for her children. Her neighbor owned a herd of Alpine dairy goats, so one day she asked if she could buy one. Her neighbor replied "Honey, if you can catch one, you can have it!" Well, she caught two! Hazel and Esmerelda were Mary's first goats. Mary soon proved to be a talented goat breeder. So talented in fact that her large herd was producing much more milk than she and her family could consume. The surplus led to her exploration of the art of cheesemaking and in 1983, Cypress Grove Chevre was born.

Humboldt Fog is Cypress Grove Chevre's flagship, award-winning cheese and is an amazing goat cheese with a creamy exterior and a texture that becomes more dense toward the center. It is characterized by a thin layer of vegetable ash that runs through the middle, similar to Morbier. Traditionally, in making Morbier, morning milk was separated from evening milk by a layer of ash. With Humboldt Fog, the ash was introduced to add subtle texture and flavor.

In addition to being the foggy home of one of my favorite cheeses, all sorts of interesting things go on in Humboldt County! According to a 2002 Cannibis News article, Steve Bloom, former editor of High Times magazine said "Humboldt is the nexus point of the whole growing movement. It's kind of like Napa to wine. Mendocino and Humboldt are the Napa and Sonoma of marijuana country...the people who left San Franciso and other parts in the 60s came up here and started doing the growing and established the whole growing industry." Their community was memorialized in the 2008 film, Humboldt County.
Hmm. So in what I can't help but believe is related news, Humboldt County is also home to the Kinetic Grand Championship. Which is seriously the most awesome thing in the history of ever. The race is known as the triatholon of the art world and involves all sorts of crazy human-powered art sculpture thingys on wheels that are designed to travel over both land and water in search of Victory and aesthetic glory. Next weekend (said Championship takes place each Memorial Day weekend), people in Humboldt County will be pedaling crazy contraptions shaped like fish or dragons and dressing like bees and martians and having an all around grand time. For real. You really need to watch the videos.
While that's sinking in (and as if that weren't enough), Humboldt County is also home to a Chicken Wingfest, the Arcata Oyster Festival, a Mushroom Fair, AND a Blackberry Festival. Note to self: WHY DON'T I LIVE HERE?!! : )
Posted by sweetbittertart at 12:43 PM No comments: