'q' is for quinoa 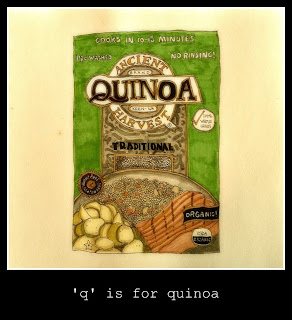 Quinoa - pronounced 'keen-wa' - is a member of the Goosefoot family, which includes plants like sugar beets, swiss chard, spinach, and the nomadic tumbleweed. Quinoa has been cultivated high in the South American Andes for thousands of years. The ancient Incas considered it sacred and coined it 'the mother grain' because of its hardy nature and nutritional benefits. Unfortunately, the Spanish conquistadors were unkind to quinoa and its production was banned for many years because of its association with non-Christian ceremonies. But it remained beloved by the Incas, and modern-day eaters are finding lots to love about it as well. You can read a detailed account of its history and the history of The Quinoa Corporation (makers of the fine product pictured above) here.

Quinoa is not actually a grain, but a very small seed, which is wrapped around the middle by a thin band. The seeds are coated in naponin, a resiny substance that's very bitter and forms a soapy solution in water. The naponin must be removed from the quinoa before it is consumed. Most producers will have already done this for you, but some suggest a quick rinse before cooking. Quinoa is prepared in a manner similar to rice by combining it with water, bringing it to a boil, and allowing it to simmer until the water is absorbed. As the seed cooks and puffs, the band around its middle separates a bit, which provides the softly textured, slightly nutty taste of quinoa with an ever-so-delicate little crunch.  Few foods pack the nutritional punch of quinoa, which is loaded with protein, fiber, vitamins and minerals.

Quinoa is yummy in salads, casseroles, pilafs or stuffings, but my favorite way to prepare it was adapted from Heidi Swanson's recipe in her cookbook Super Natural Every Day, which is seriously one of the most wonderful cookbooks in the history of ever.

Quinoa Patties on Arugula With Goat Cheese and Vinaigrette
Adapted from the recipe for Little Quinoa Patties, Super Natural Every Day

Combine the quinoa, eggs, and salt in a medium bowl. Add the pepper flakes, chives, onions and garlic. Add the bread crumbs, stir and let the mixture sit for a minute or two to allow the crumbs to absorb some of the moisture. If you need more moisture, add a bit of water. If you need less, add a bit more bread crumbs, but it's better to err on the side of moist than dry. Your mixture is now ready to form into patties. I like them about 3 inches wide and 1 inch tall.

Heat the oil in a large, heavy skillet over medium low heat. Add the patties, with enough breathing room around them. Cover and cook gently for 7-10 minutes until the bottoms are a crusty, deep golden brown. Carefully turn the patties over and cook, for an additional 7 minutes or until golden. I usually keep them covered for a bit, then uncover them during this phase. Sometimes the second side cooks quite a bit faster than the first side, so keep your eyes on them, or lower the heat a tad if necessary. When done, place on a wire rack to keep them crisp.

Next, divide the arugula among plates - this recipe usually makes at least 2 patties each for 4 people - top with the patties, crumble liberal amounts of goat cheese over them, toss some chopped scallions about, and drizzle with your favorite vinaigrette. They are so delicious! This recipe is also great because you can make the mixture or the patties ahead of time and store in the fridge for a day or so.

And now, for what may be one of the most arresting things you will ever witness as it relates to the preparation of this delectable little seed, I give you this two-part dose of awsomeness here and here. You're welcome.
Posted by sweetbittertart at 5:12 PM 4 comments: