'r' is for russian rye bread 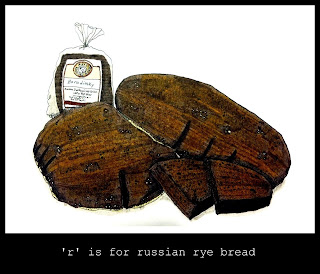 All sorrows are less with bread. ~ Miguel de Cervantes

As you know from a past post, dear readers, there are few things I love more than bread. So imagine my delight when I happened upon a new bakery offering complimentary bread samples at our local farmer's market. After just one bite I was completely smitten. Dark, dense, aromatic and flavorful, it was like no other bread I had ever tasted. Naturally, I wanted to know everything about this bread and its baker.

Meet Alex Roginsky-Podlyas, proprietor of Alex's Russian Bakery and baker of wonderful Russian rye breads. Born in the Ukraine, Alex came to the United States with his family when he was 14 years old. He always enjoyed cooking with his mother, and while in high school, he worked as an interim chef for a small Japanese restaurant in Milwaukee, Wisconsin. He graduated from the University of Wisconsin with a degree in Political Science and Law Studies. "I had no clue what I wanted to do when I 'grew up'," said Alex. "I knew I loved all things food, but I also knew that line of work was grossly underpaid. Serving up teriyaki skewers and tempura shrimp was not going to make me wealthy."

So he set out to conquer the world of finance. He held various jobs in financial sales and retail banking, eventually moving to Jacksonville, Florida, to accept a position with a Wall Street bank. He was very successful - so much so that he traveled to India to train recent university graduates to work on the bank's systems. "I was the go-to guy for all of the 'important guys' in our Wall Street office and was the ace who either knew answers or could find answers to everything very quickly," he explained. But alas, one year when it came time for his annual performance review and potential bonus, he received surprisingly low marks. Alex was confused. "I thought I was being read another person's performance review," he said. Politics, favoritism or some other corporate wheels were evidently in motion and, as far as Alex was concerned, the writing was on the wall as it related to his future with the bank.

His disillusionment with his financial position led him back to his first love - food. After considering his options, he decided to work with sourdough bread. "I thought my fellow Russian peers would love my bread," he said, "and given there are not many options for Russian bread in the United States, I thought my business would do well."

Alex is focused on producing both sourdough rye and wheat breads, using only natural yeasts. He explained that sourdough breads do not necessarily have to be 'sour' (his breads are not) and likened the skill involved in managing the yeast in bread baking to that in beer brewing; the yeast is what gives flavor to both. The art is in creating the perfect balance.

Perfecting that balance, however, was no simple task. "I must have had 200 trials and failures before my bread looked and tasted like the real thing; like it was made in a real, old-fashioned, countryside bakery in some obscure location in Latvia," he said. And although I have never been to a real, old-fashioned, countryside bakery in an obscure Latvian location,  I would bet real serious money the bread there would taste just like Alex's. "I researched scientific journals of modern times for months to understand what Latvians figured out a few centuries ago without modern science - scalding flour with boiling water and 'sweetening' dough through a slow multi-step fermentation produces bread that is both nutritious and delicious (read more about it here). Modern science proves rye bread is the healthiest bread," he says. Healthy, and hearty - one (albeit very large) loaf can weigh almost 20 pounds!

My favorite among the breads he produces is the dark and spicy Borodinsky, which is beyond delicious. Did you know that the village of Borodino was the site of a decisive battle between the Russian army and Napoleon in 1812? It's true! Legend has it that on the eve of the clash, the wife of a Russian general wanted to bake some special bread to fortify and encourage the soldiers. She seasoned the bread with coriander, a beloved local spice. Napoleon subsequently lost thousands of troops in the battle, and Borodinsky acquired its heroic status among Russian breads. Officials at the Museum of Bread (yes, there is such a thing) in St. Petersburg dispute the relationship of Borodinsky and the Battle of Borodino, but...it's a good story nonetheless, no?

Alex is passionate about producing a pure and authentic product. "I believe we've been living in an era of decreasing knowledge about bread and nutrition in general. My bread contains six ingredients or less. They are the most basic ingredients - water, flour, salt, roasted barley, sugar or molasses, spices. This is as fundamental as fire, wind, earth, water," he says. It seems that Alex has at long last found the real wealth he was seeking, and we are fortunate he has chosen to share it with us.

You can find Alex most Saturdays at the Riverside Arts Market, and he has plans for a brick-and-mortar location on Edgewood Avenue in the heart of Murray Hill. Hooray! In the meantime, you can follow and support his delicious journey via his Facebook page.
Posted by sweetbittertart at 7:04 PM